Last month Wise Hedgehog Studio team took part in Ludum Dare 42 game jam. A game jam is an accelerated game development competition. Ludum Dare is the oldest and widely known online jam. It is held three times a year. You have two or three days to create a game that fits a given theme. This time participants submitted over three thousands games!

It’s our second time participating in Ludum Dare, and we loved the experience. Over the weekend we created a little puzzle game “No Space In My Stomach” about an extraterrestrial snail Stewart.

Play “No Space In My Stomach” at itch.io

After the “submission hour” the voting begins. It lasts for three weeks, you play other games and rate them in several categories: Overall, Fun, Innovation, Theme, Graphics, Audio, Humor, Mood. Here are our results:

It’s not easy to create a game in just three days, but I believe we did pretty well. We received tons of positive feedback and constructive criticism! After some thought, we decided to continue the development later.

We recommend everyone who is interested in game development, to try to take part in some game jam (there are a lot of them) for the number of reasons:

Some recommendations for Ludum Dare participants

After taking part in two game jams, I came up with some general recommendations:

How we made “No Space In My Stomach”

Just like previous time, we decided to start early by brainstorming ideas for all sixteen themes which made it to the final theme voting round. In our opinion, it’s an excellent way to wake up your “creative muscle,” if it’s sleeping. Last time it helped, we came up with ideas we used in the games.

When we woke up Saturday morning and read the announced theme — “Running out of space” — we realized that the brainstorm didn’t work this time. We didn’t like this theme, the idea we had for it wasn’t that exciting. So we had to come up with a better concept.

Stanislav invented a puzzle-platformer with simple mechanics: there are colored platforms and “pills” of the same colors. When a character eats a pill, all platforms of a corresponding color disappear. Stomach size is limited, and you can’t eat more than three pills, so you need to think about which pills and in what order to eat. We also added a toilet which you use to free character’s stomach (but only once). It let us make pretty complicated levels. 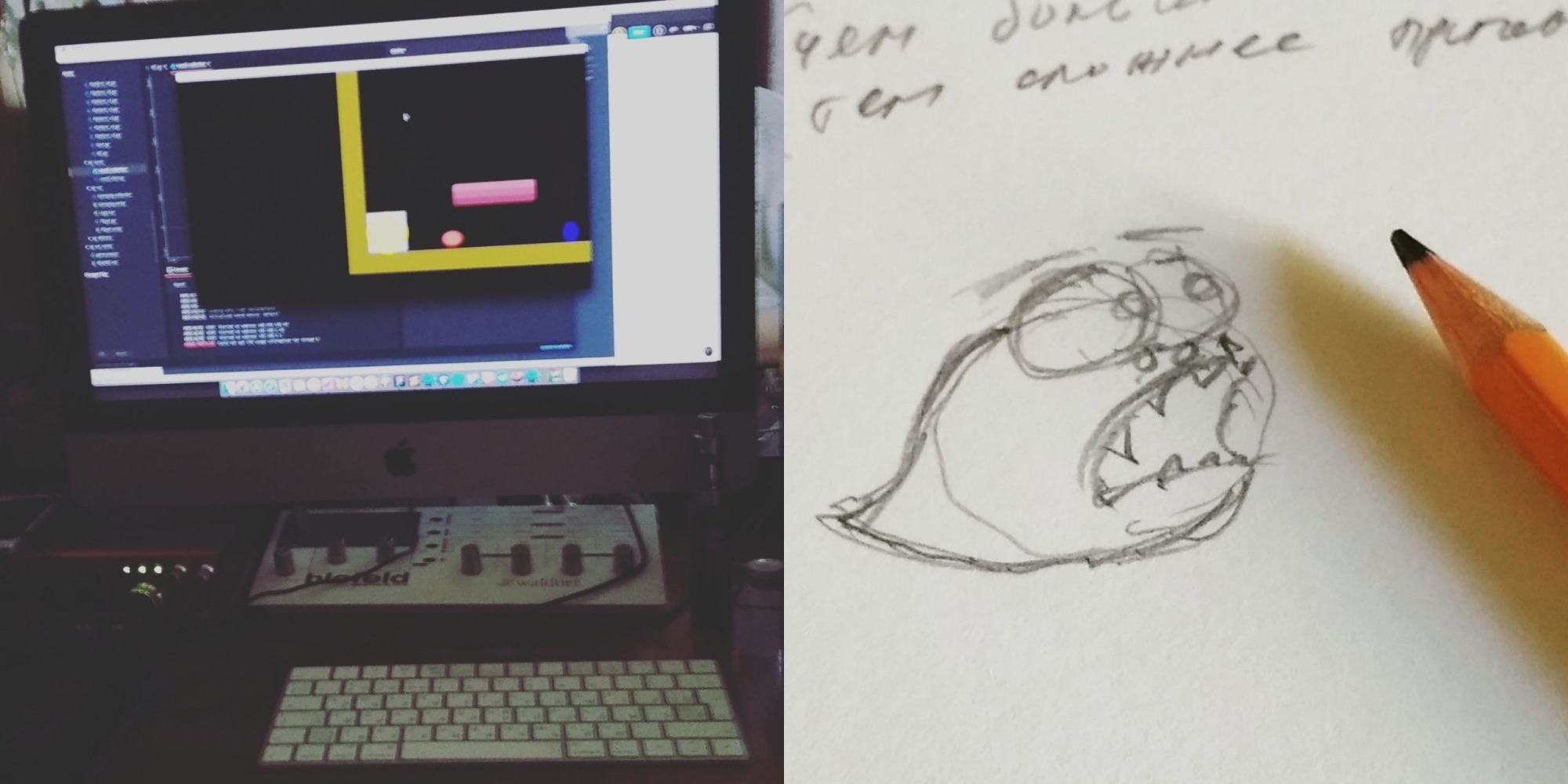 How it all started

To speed up development, we used a new library for Defold — Platypus. This library implements all ordinary platformer mechanics. Ludum Dare rules allow using 3rd party libraries. I built the first playable game prototype in about three hours; it was good enough to start designing and testing levels. Anna was working on graphics, and she did a fantastic job!

While Anna and Stanislav were doing their job, I was fixing bugs and adding nice visual effects here and there.

Day 2: From a prototype to a finished game

I dedicated my second day to routine work mostly: adding more effects, polishing, and implementing GUI. However, the best part was composing music and recording sound effects. Music was the most challenging task, I finally wrote it after three poor attempts.

Anna and Stanislav finished their work by evening, and the game was almost complete! My kids took part in testing while I was finishing GUI and fixing minor bugs. 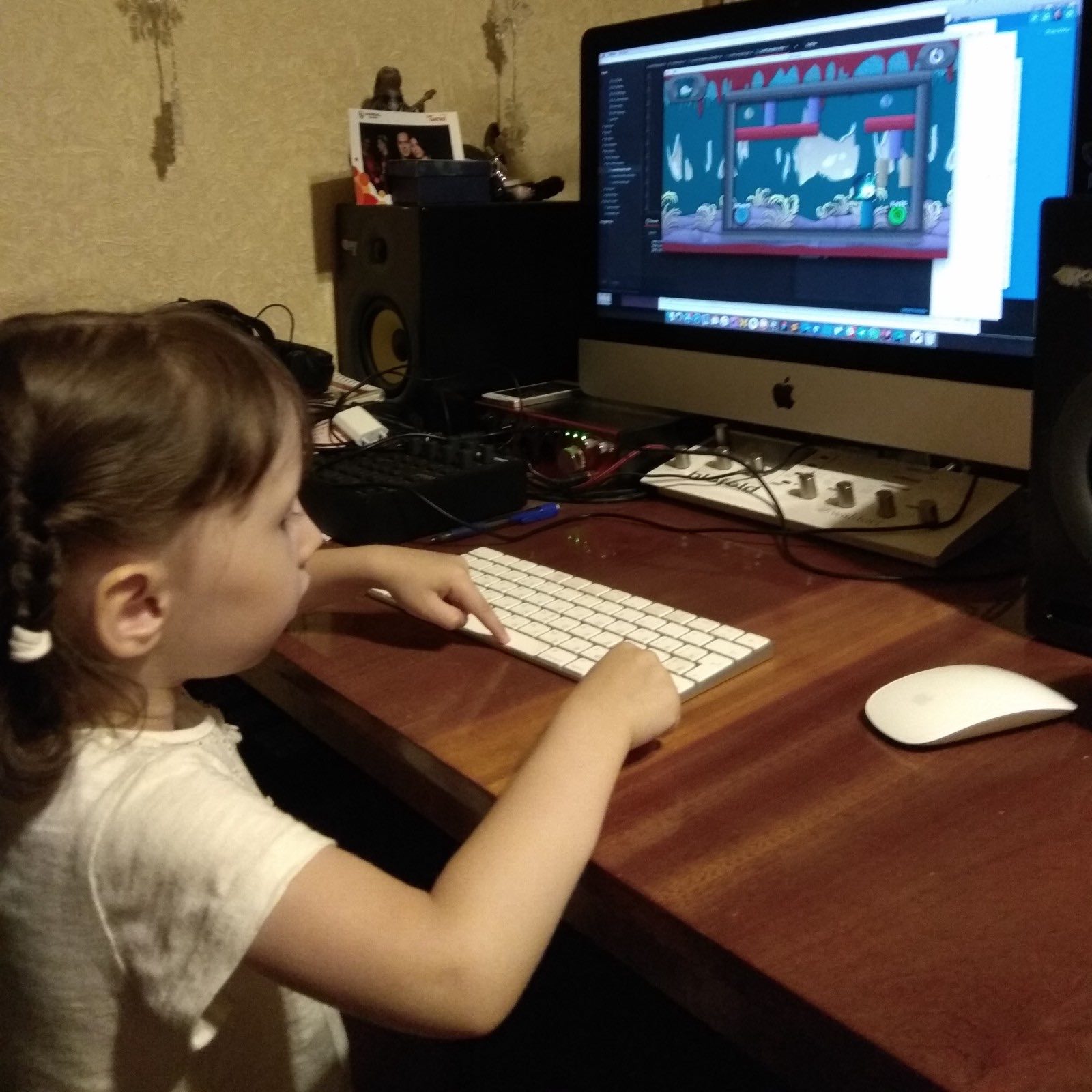 The third day was Monday, and we all have our daily jobs, so there wasn’t much time to work on the game. So I just added saving game progress and a little tutorial, integrated GameAnalytics, and, finally, published the game. We did it!

Now, when the jam is over, and we collected much feedback, it’s time to retrospect our work.

What we did right

What we did wrong

Ludum Dare 42 was a fantastic experience for our team. We’re looking forward to taking part in the next jam in December!