It is the second article in “Creativity through limitation” series. Check out the first one: 8-bit demoscene. In this article, I’m going to tell you about the fantasy console PICO-8 and recreate two classic demoscene effects with it.

When was the last time you coded something just for fun? If you’re like me, then it hasn’t happened for years. However, about a year ago, I learned about PICO-8, bought it, and I have to say that these were probably the most worthy $15 I spent on myself last year!

PICO-8 is a fantasy console for making, sharing and playing tiny games and other computer programs. When you turn it on, the machine greets you with a command line and simple built-in tools for creating your own cartridges and exploring the PICO-8 cartverse. — PICO-8 official page

Do you remember the era of 8-bit video game consoles and computers? PICO-8 returns you to those times. It is an “emulator” of a non-existing video game console with Lua “CPU” developed by Lexaloffle. It has a set of wisely designed constraints (speed, color palette, screen resolution, sound, and memory) which may look ridiculous, but it stimulates your creative muscle. Also, to let you start creating right away, PICO-8 gives you simple but convenient built-in tools: code, graphics, and sound/music editors. 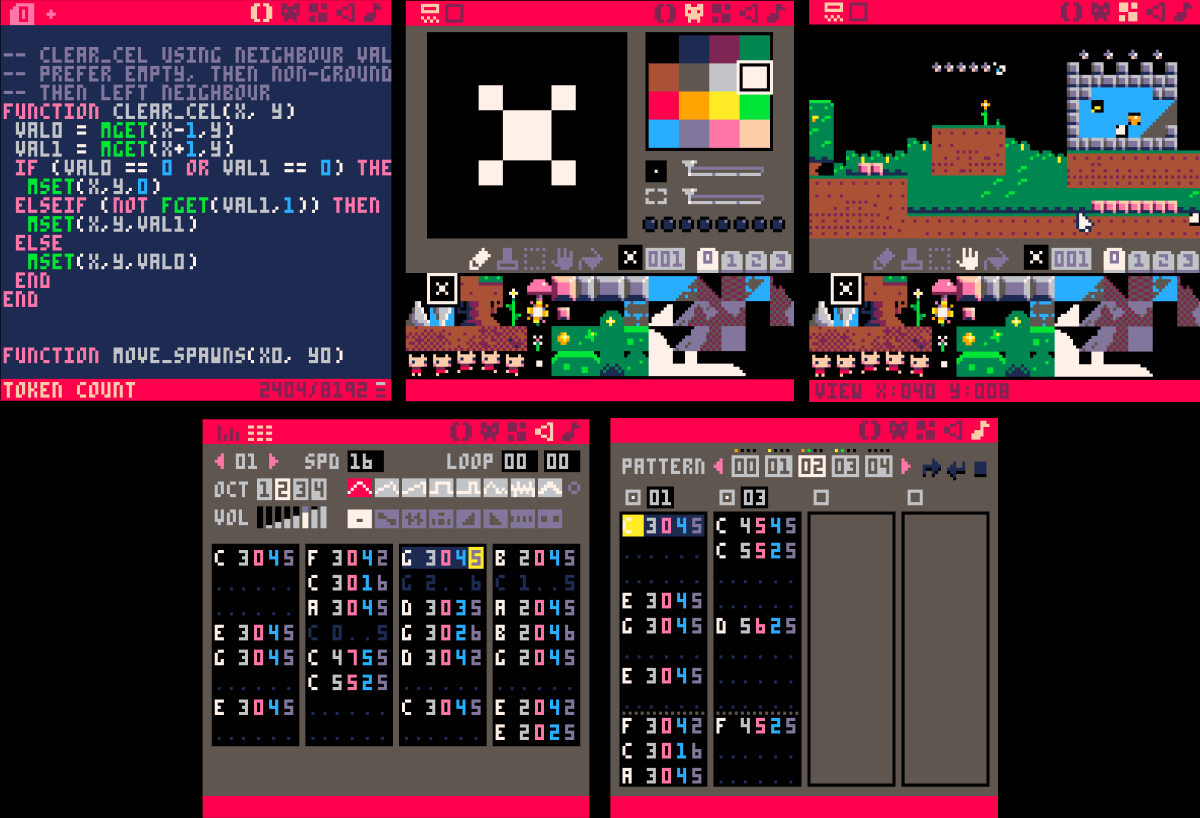 PICO-8 has a fantastic community. Many people create games, demos, and tutorials. Teachers use it at schools to teach children programming. Professional game developers use it for experiments. One thing unites them all — it’s fun!

There’s also a pretty unique creative genre on PICO-8 — Tweetcart. Tweetcart is a program that fits in a Tweet (up to 280 characters) and produces some impressive visual effect. The idea is very similar to demoscene intro.

BTW It took me about an hour to realize I had some extra spaces in the code!#pico8 #tweetcart #tweetjam #screenshotsunday pic.twitter.com/qx7XsjumOB

You can find more on Twitter by #tweetcart or at Museum of Tweetcart History.

If you don’t know what demoscene is, read the first article in this series. Many classic effects are recurring in different demos, and I’m going to re-create two of them on PICO-8: Vertical raster bars and Rotozoomer. PICO-8 uses the Lua programming language. If you‘re not familiar with it, it shouldn‘t be a problem, because Lua syntax is simple and straightforward.

Let’s start with Vertical raster bars (also known as Kefrens bars, even though the first implementation was done not by Kefrens demo group). They look impressive on old computers because you could think — wow, they draw so many vertical lines! In reality, this effect doesn’t require drawing vertical lines at all. The classic implementation utilized Amiga’s ability to run some code for every scanline and change video memory address. You create a buffer for just one line and draw it repeatedly, adding a small “bar” every time in a different position.

You can use the same approach on PICO-8. There are no horizontal blank interrupts, but you don’t need it; instead, you use memcpy function. Let’s create a template first.

I like to use coroutines for both drawing and updating state variables because they allow me to write code linearly and encapsulate all variables in a function. The downside of this approach is the slowdown if your drawing code occasionally takes more than one frame to complete. When you use _update() + _draw() approach, you only get frame rate drop, because PICO-8 always executes _update()/_update60() at the constant rate (30/60 times per second), but may call _draw() at the lower rate (30/15 times per second).

So, here’s the code with comments:

Now let’s add a roto-zoomer. I tried implementing a full-screen roto-zoomer on PICO-8 in 60 FPS and ran out of CPU time. However, if you combine a roto-zoomer with raster-bars, you don’t need to do it full-screen — You can draw in empty space only! It’s easy to track empty space with raster bars: the bar gets only wider every line, it can’t get narrower, so you can keep simply track the lowest and the highest X coordinates.

Explanation of the main variables.

Instead of using texture look-up, I use bitwise operations to create checkerboard. band(ztx, 8) gives a series of 0’s and 8’s every 8 pixels, bxor(zty, ztx) creates a checkerboard. To speed up the code and make both effects run in 60 FPS, I reduce the horizontal resolution and plot 2 points with a single poke (write a byte to memory) function instead of pset.

That’s it! You can find the full code and some other effect I create in my PICO-8 repository on GitHub.

As I recall, it’s the first time I’ve tried to explain a demo effect, and I’m afraid that it may not be clear enough. I tried to add as many comments as possible, but if you’ve got any questions, let me know, I’m ready to improve and add more details. Thanks for your attention!